We’re doing our part in fixing the Pistons’ lackluster offense. Are you?

Other than envious year-round weather and a gluttony of local celebrity so-and-so’s, the cities of Detroit and Los Angeles also share another trait: rim running big men.

DeAndre Jordan of the Los Angeles Clippers and Andre Drummond of your Detroit Pistons are both athletic non-shooting bigs but only one, Jordan, played for a top-10 half-court offense last year.

Drummond averaged three more points (15 to 12) than his Clippers counterpart but took almost four more shots per game to do so. Jordan, not surprisingly, shot 64-percent from the field compared to Drummond’s 53-percent despite an overwhelming majority of shot attempts coming from the same spot on the court: 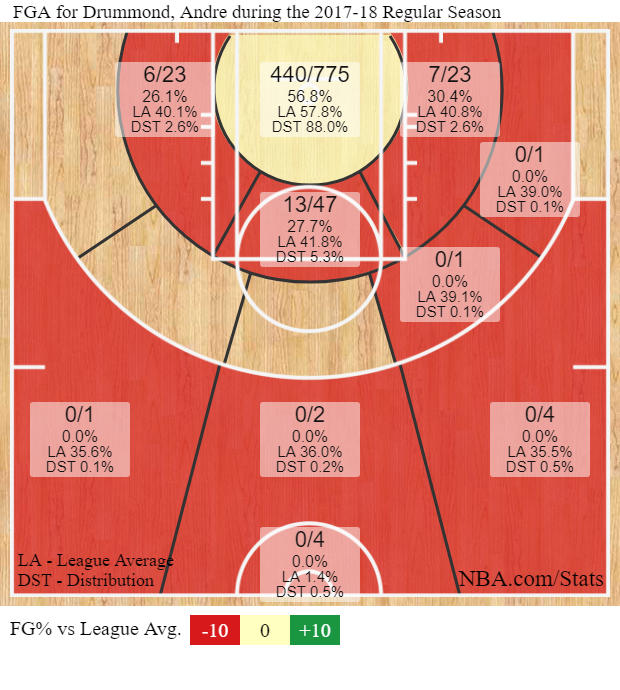 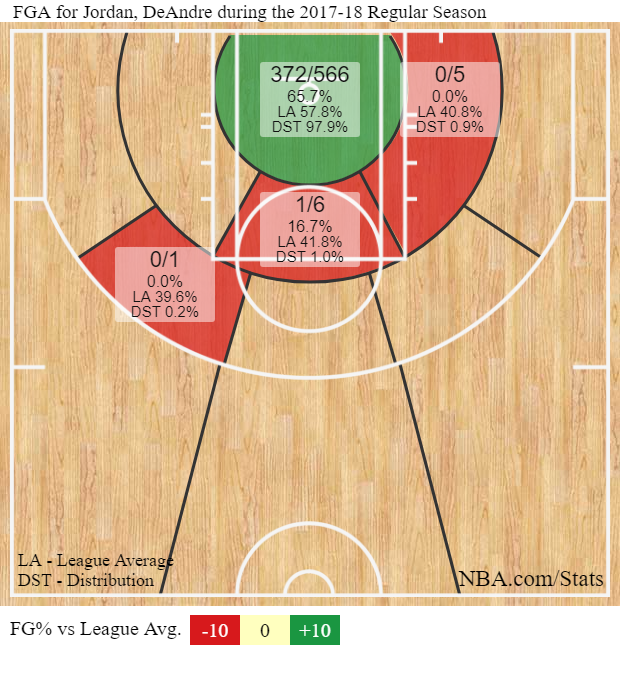 The glaring comparison between the two similarly skilled big men has been made ad nauseam but it’s June and the Pistons’ season has been over for almost two months, what else do you have to do?

Yeah, that’s what I thought.

The question is: how? How is Jordan able to be so much more efficient than Drummond while also being an important cog in a top-10 offense? Where are the Clippers positioning him to re-enforce such positive production?

That’s what we’re here to answer. Copycatting the premise of last week’s unsolicited advice to the Pistons, below, we’ll go over the rewarding concepts and schemes the Clippers use to benefit DeAndre Jordan that the Pistons can steal.

Fitting in with Griffin

It didn’t take too long after the late-January trade to gather that Griffin really enjoys operating on the left side of the court from either a face-up or back-to-the-basket. It also didn’t take long to piece together that Drummond has no clue where to go or what to do. Many of those possessions looked like this:

There is a time and place to hang around the basket and hunt put-backs but Drummond makes life easier on the defense by doing the same thing over and over.

Both Jordan and Drummond are elite level athletes which means the simple act of moving becomes advantageous for the offense. When Griffin set up shop on the left block while in a Clippers’ uniform, Jordan, at times, would be on the move:

The “at times” part is all that’s required. Mixing it up, if only for a handful of possessions, gives the defense something additional to think about. In my backyard, we call what Jordan did (immediately following Austin Rivers’ cut with one of his own) a chop cut. Call it whatever you want but the Clippers called it effective. Add the chop cut with a splash of the Warriors’ split screens and, now, the Griffin post-up isn’t an automatic iso attempt.

In the switch-happy NBA, mismatches are plentiful and it’s something the Pistons should ride into the ground with a talented player like Griffin. Again though, when this occurred in Detroit, Drummond’s know-how of what to do was lacking:

DeAndre Jordan has a much better understanding of making himself available:

Much of this is “feel” based and Drummond’s comfort level should rise as the two enjoy a full summer, training camp and pre-season together. The result of improved chemistry should lead to easier looks for Drummond.

The drag screen is an inevitable scheme ran by every team with a rim running big and both the Clippers and Pistons are no exception. The drag screen takes place anytime the big is trailing behind (or parallel to) the attacking ball-handler. It was a staple of the Pistons’ offense leading to a countless number of Drummond dunks and point guard penetration:

Looks good, right? It is! But it could be a bit more dangerous with the addition of DeAndre Jordan’s perfectly timed slip:

As noted, the drag screen is a common routine for all trailing bigs. Knowing this, the defense will creep up in anticipation and that’s when Jordan burns them. In every single Jordan example, you can clearly witness him setting his man up for the eventual slip.

Sometimes, even if it’s not there, it’s there.

Most back-peddling and retreating bigs have zero chance in staying with a downhill athlete like Jordan or Drummond. Below, and like Kanter v. Jordan, Al Jefferson has no chance at stopping a sprinting Drummond but he still chose to set the screen:

Like I said, the Pistons’ version is good but it can be better. It’s not that Drummond has never slipped but (like introducing the chop cut) there needs to be a healthier variety.

The dunker spot is the area along the baseline that is just outside the lane but not quite in the short corner. It’s a place where bigs habitually live and where smart bigs thrive.

When a perimeter defender gets beat on the wing and towards the baseline, the first rotation in nearly every defensive concept is for the weak-side big to slide over and meet the ball-handler at the strong-side box. It’s a domino effect of rotations which includes a defender sinking down to take over the responsibilities of the rotating (and now vacant) big. Jordan, as good as anyone in the league, does not let the sinking defender get in his passing lane. The result is an uptick of easy buckets:

Drummond, on the other hand, has a tendency to lose interest with possessions that don’t directly involve him. It doesn’t - and shouldn’t - have to be that way.

It’s not just passing lanes that are affected by Jordan’s correct positioning, it’s the rebounding as well:

Above, as JaVale McGee slides over to the box, it leaves Steph Curry rotating down to Jordan. Yeah, Curry didn’t have a chance.

One of the best ways to single out a specific defender is to apply a single-tag pick-and-roll. A majority of non-switching defenses use three people to stop a PNR which includes the two defenders directly involved and a weak-side “tagger” to slow down the rolling big.

In a single-tag pick-and-roll, there is only one defender on the weak-side and he must now choose between staying home on the three-point shooter or tagging the roll man. The Clippers employ this strategy as good as anyone:

No one slows down the rolling Jordan and the outcome is two great high-percentage looks.

Functionally, top-of-the-key PNRs and DHOs are the same thing and they solicit the same defensive requirements:

Like pretty much everything discussed, the Pistons use the single-tag PNR but an increase in volume could net more efficient looks for Drummond.

Come down with the ball

It happens in every pick-up game across the world. When someone who plays above the rim steps onto the court, the amount of attempted alley-oops goes through the roof with most of the passes registering as uncatchable.

The NBA was its share of flawed passes too but the room for error is much larger with guys like Jordan or Drummond on the receiving end.

Per nba dot com, Andre Drummond converted on 81-of-106 alley-opp attempts, good for 76-percent. DeAndre Jordan connected on 86-percent of his oop attempts going 112-of-131. In the big picture, it’s a minor detail but these things add up.

The last time I checked, there is no rule stating that you must try and convert every oop thrown. Jordan understands and implements this approach:

While Drummond struggles with this particular line of thinking:

Better judgement on Drummond’s part might only lead to a handful of additional made shots but it’s all part of the process.

When the Clippers were clicking on offense last year, an important ingredient included the patience shown by their point guards in letting the play develop. The aftermath included secure looks for DeAndre Jordan:

It’s not to say the scrappy group of Clipper point guards always practiced patience but when they did, good things happened. Conducting the pick-and-roll is equal parts science and art. Both Reggie Jackson and Ish Smith have a great relationship with a rolling Drummond but, you guessed it, it can always get better.

That’s it for now. Expect to see a handful more of these entries as the summer rolls on. If I had to guess, I’d bet Clint Capela and the Houston Rockets are next. But I’m just speculating.