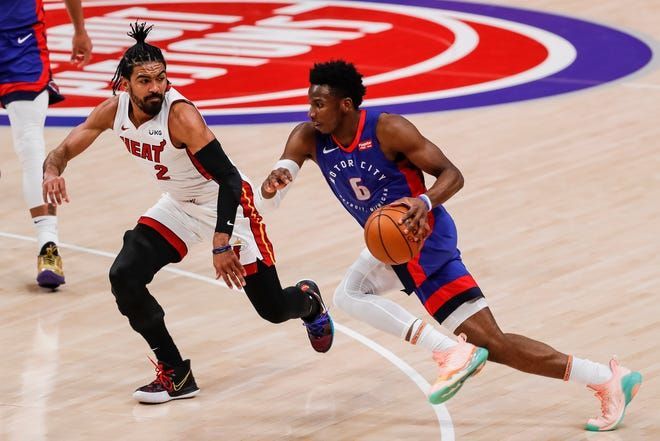 Hamidou Diallo is primed to breakout in his first full season as a Piston.

As the teams around the NBA approached the 2021 trade deadline, Pistons GM, Troy Weaver continued to ‘unload his clip’, this time on one of his former Thunder prospects. The Pistons acquired Hamidou Diallo via trade in early March for Svi Mykhailiuk and a 2027 second round pick. In 20 games for the Pistons, the third year wing put up a 11.2 ppg and 5.4 rpg, flashing his potential as an impactful two way player. Diallo was deployed as the first wing of the bench in the majority of his appearances for the Pistons however, as a starter Diallo was impressive, most notably notching a 35 point outburst in early May against the Hornets. Coming out of Kentucky in 2018, Diallo fit the profile of your typical freak athlete wing, he could get into the paint and wreak havoc, but lacked the ball handling and perimeter skills to keep a defense honest. However, in his third season Diallo took steps towards rounding out his offensive game to become a more dynamic player with ball in hand. In this piece, we dive into some of the strengths and areas for improvement of Diallo’s game and what we can expect to see in the 2021-2022 season.

In 32 games for Oklahoma, Diallo dished out 2.4 assists per game. While this stat doesn’t jump off the page, as per Cleaning the Glass, Diallo had an assist percentage of 16.1%, which placed him in the 87th percentile of all wings in the NBA. The most notable improvement to Diallo’s playmaking was his improvement as a pick and roll ball handler. The third year wing was diligent in his decision making, often probing the defense with a few dribbles before finding the open roll man. Diallo has clearly worked on his handle since entering the league, allowing him the ability to carefully dribble in traffic and make smart passing decisions.

In his brief stint with Detroit, Diallo struggled to replicate his production as a passer however, the reduced production was largely due to the glut of guards on the Pistons roster. In games where Diallo had opportunities to handle the rock, he was able to dish out some pretty dimes. As we approach Diallo’s first full season with the Pistons it will be interesting to see if Coach Casey will feature Diallo as a ball handler, particularly with the depth at the guard position.

Another feature of Diallo’s game is his ability to rebound and score in transition. Diallo has all the physical attributes to out jump and out muscle opponents on the defensive glass. ESPN had Diallo ranked as the 9th best rebounding guard for the 2020-2021 season and Cleaning the Glass has him placed in the 97th percentile for defense rebound percentage (18.7%) amongst wings. With the front office electing to prioritise shooting at centre position, it will be imperative that the Piston wings help crash the defensive glass. As for transition opportunities, The Pistons ranked 25th in the NBA for fast break points, scoring only 10.7 points a game. Thus, a full season featuring Diallo’s ability too ‘grab & go’ should considerably aid the team in this area.

Additional areas of strength for the former Kentucky Wildcat are his ability to make effective cuts to the rim as well, as his potential to be a plus on-ball defender. To a casual fan of basketball, the act of cutting may seem basic and insignificant. However, there is a lot of value in players who show a willingness to cut. An effective cut to the rim can give NBA defences fits, there’s a certain unpredictability about a basket cut, it can leave opposing defense in two minds. It’s important for a player with the skillset of Diallo to be willing to cut to the rim, particularly as he develops an outside shot. The potential of Diallo cutting helps offset his lack of three ball and in turn helps create space for the 4 other players on court.

Diallo also projects as a disruptive on ball defender, he has the strength and agility to stay in front of his opponent. Standing at 6’5" with a 6’11" wingspan he has the ‘measurables’ to guard positions 1 through 3. However, while he has all the attributes to be a great defender, he is not always engaged. When reviewing film, he often had trouble navigating screens, leading him to get caught behind his opponent in the proverbial ‘no mans land’. When screens weren’t involved, Diallo was able to stop his man more often than not, he’s notably one of the best shot blocking wings in the NBA landing in the 93rd percentile as per Cleaning the Glass. Diallo’s on ball defense is definitely an area to keep an eye on for the upcoming season.

Whilst his on ball defense is encouraging, Diallo struggles as an off ball defender. When reviewing film from the 2020-2021 season, there was at least a couple of instances per game where he would get caught ball watching, leading to his opponent draining an open three. Diallo also showed a tendency to sag into the paint, leaving his man open in the corners. This would be fine if his direct opponent isn’t an outside threat but, in far too many cases his opponent would make him pay with three points. It appeared that he would sag in the paint in attempt to real in defensive rebounds, whilst it's encouraging that he wants to crash the boards, it can’t come at the expense of the most efficient shot in the game, open corner threes.

Interestingly, Diallo wasn’t the most efficient in finishing at the rim in his 20 games with the Pistons, shooting 60% in this area. As per Cleaning the Glass he ranked in the 41st percentile for shots made at the rim. He also struggled shooting in the short-mid range (floater area) of the court, landing in there 50th percentile. When going through the film, its’ clear that Diallo struggles to finish consistently in traffic. He particularly has issues when he is forced to contort his body to avoid the defender’s outstretched arms. Additionally, it seems he isn’t overly comfortable in using his opposite left hand to finish shots in the paint as he often missed left handed attempts. Whilst 60% shooting at the rim isn’t horrible, it’s important for Diallo’s development that he can increase this percentage closer to 70% or more.

Year 4 is a massive year for the former second round pick, after signing a 2 year team friendly deal this past offseason, Diallo will be looking to boost his value around the league for a more lucrative deal in the summer of 2023. There is real reason for optimism when it comes to Diallo, he has all the physical tools to be a two-way starting wing in the league. It still remains to be seen if he can develop the all important three ball, he shot an encouraging 37% for the Pistons however, he only took 2.1 threes per game. I choose not to focus on the three ball in this article as his jump shot is the most clear and obvious skill requiring improvement but, if he can develop an outside shot it will unlock the rest of his offensive game. When assessing the Pistons depth chart, It seems almost certain that Diallo will start this season as first wing off the bench. If he can continue to improve his handle and jumper, there is no reason Hamidou Diallo can’t join Cade, Beef Stew and Saddiq as part of the Pistons core going forward.