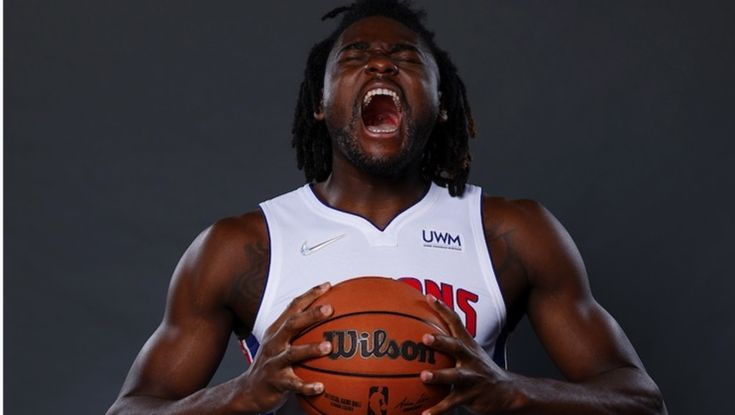 With a noticeable lack of big man on the roster, the Pistons will be relying on Stewart to take a leap this season.

The Detroit Piston’s 2020 NBA Draft was chaotic to say the least. Entering the draft, the Piston’s had a single first round pick. At the conclusion of the night, three rookies were selected in the first round. It was clear that newly instated Pistons GM, Troy Weaver, was ready to turn the page on previous regimes mistakes and start his ‘restoration’ of the franchise. With pick 16, Weaver selected the undersized center out of Washington, Isaiah Stewart. Standing at a mere 6’9 and with a limited perimeter game, the Stewart pick was widely considered a reach. However, an early season injury to Jahil Okafor provided Stewart with the back up center minutes. He quickly won over Piston’s faithful with his tenacious energy, earning the nickname ‘Beef Stew’. Stewart put together a strong rookie season, exceeding all expectations and earning a position on the NBA’s All-Rookie Second Team. At the conclusion of the season, it was clear that Stewart can be A GUY on a winning team but, there are still questions as to whether or not he can be the starting center for that winning team.

One of the main knocks on Stewart entering the draft was his lack of athleticism, both vertically and laterally. The concern was he would not be able to effectively protect the rim or guard the pick and roll. Whilst there were struggles in the beginning, Stewart was able to offset his athletic limitations with improved defensive IQ and timing. When looking back on film early in the season, he struggled with his positioning in the pick and roll, often over committing to the ball handler and leaving the roll man open for easy lobs. On the flip side, he would get caught too low in drop coverage, allowing opposing guards open jumpers. It’s typical for a rookie to struggle on the defensive end for their entire first season. However, after only 30 games, Stewart showed signs of progress and began tormenting opposing guards with his 7’4 wingspan. As the season advanced, he flashed his potential to switch out to the perimeter and contain opposing guards, putting too rest initial concerns of limited mobility.

Heading into his Sophomore season, it will be particularly interesting to see how Stewart handles opposing stretch bigs, their ability to space the floor tested his defensive positioning at times. He struggled mightily to guard Nikola Vucevic in an early May matchup, Vucevic had Stewart’s head spinning with his array of mid-range jumpers and floaters.

Stewart also showed encouraging signs as a rim protector in his debut season. One of the certainties with Stewart's game coming out of Washington, was his ability to block shots. In 14 games as a starter, Stewart was able to replicate his production from college, swatting 2.1 shots a night. Additionally, Stewart led all rookie’s in blocks per game averaging 1.3, which placed him in the 86th percentile for block percentage amongst all NBA bigs (as per Cleaning the Glass). However, blocked shot numbers do not define a players ability to protect the paint, just ask Hassan Whiteside. A statistic which helps us rank the best rim protectors, is defensive field goal percentage within 6ft of the rim. When directly guarded by Stewart, opponents shot 54.5% at the rim, for comparison, Rudy Gobert allowed opponents to shoot 48%. Whilst Stewart may not have the potential of Gobert as a rim protector, he certainly has the tools to improve this part of his game as he develops. An area where Stewart can also look to improve is his fouls per game, as a starter he averaged 3.1 fouls a night. That number would of ranked him in the top 10 for fouls per game. With a Pistons roster devoid of rim protection and rebounding, the team can’t afford to have Beef Stew riding the pine.

Towards the back end of the season we saw Stewart begin attempting mid-range and three point jumpers. In the last 10 games of the regular season, Stewart averaged 3.2 three point attempts per game. It was clear that Dwane Casey and his coaching staff were imploring Stewart to take open catch and shoot attempts. The vast majority of three point attempts came out of pick and pop action, with Stewart launching threes from above the break. Stewart was able to connect on a solid 33% of 60 three point attempts, an encouraging percentage considering the developmental stage of his jump shot. The evolution of Stewarts jumper will be key in deciding his future role in the league. It will be crucial he can knock down three’s at a decent clip to help offset the limitations he has due to his lack of size and bounce.

The former Washington Huskie also showed the ability to knock down mid-range looks. As per Cleaning the Glass, Stewart placed in the 80th percentile on long mid range (outside 14 feet) jump shots, making 48%. To put that number in perspective, Joel Embiid also converted on 48% of his tries in the same area. Whilst the mid-range game is often frowned upon, Stewarts success in the mid-range should provide hope he can develop a consistent three ball.

An area where Stewart needs to improve is his ability to finish around the rim. As per Cleaning the Glass, Stewart finished the season ranked in the 35th percentile for rim finishing amongst NBA bigs. The rookie center often struggled to finish over athletic centres such as, Clint Capela and Bam Adebayo. Stewart’s lack of vertical lift often forced him to rush shots around the rim, in attempt to avoid lengthy, athletic centres swatting his shot away. Beef Stew ended his rookie campaign shooting 64% on attempts within four feet of the basket. Whilst 64% may seem efficient, it pales in comparison to the best finishing bigs in the league. The most efficient bigs, such as Anthony Davis & Deandre Ayton, shoot 75%+ at the rim. While it’s important Stewart develops his jump shot, he will need to ensure he improves his rim finishing to continue to elevate himself as a starting caliber center in the NBA.

When assessing the Piston’s depth chart for the upcoming 2021-2022 season, it’s clear that Stewart will be given fair opportunity to prove he’s a starting caliber center. Whilst Stewart exceeded expectations as a rookie, there are still concerns with his ability to anchor an NBA defense, night in and night out. However, whether or not Stewart can eliminate these concerns won’t be from a lack of trying, his motor and work ethic are his best asset. With the recent announcement of Ben Wallace returning to the franchise, the star’s are aligning for Beef Stew to represent the new era of Detroit Pistons basketball.