I'll preface this by saying, again, that I'm seemingly alone in finding the future of our beloved Pistons pretty bleak these days. I'll just leave the pessimism there, though, because the point of this FanPost is for me to go through the roster one-by-one and find some number or number-related-trivia that's going to rekindle my optimism going forward.

Important note: The actual amount of weight any of these numbers are worth, both in reality and in my Fan Brain, is besides the point.

Cory Joseph - Every Single Offensive Number as a Piston - Cory's career basketball-reference ORTG is 108, and his career Offensive Box Plus-Minus is -1.4. Those numbers rocketed to 117 and 0.3 in 502 minutes as a Piston. He upped his usage, scoring efficiency, and assists/36. Let's hope these numbers don't regress in the slightest, and Cory will either be a valuable bench spot on an up-and-coming Pistons team or an enticing trade chip.

Kelly Olynyk - 11 2PA/100; 7.6 FTA/100; 6.3 AST/100 as a Rocket - Kelly ended up on a tanking Houston roster at the end of last season, but this turned into a blessing in disguise. Surrounded by kids, he was able to take a more featured role in an offense and the results on that side of the ball were encouraging. The Rockets offense without Kelly was terrible, the offense with Kelly was solidly middle of the pack. He'll probably get a chance to do more offensively again this year with the Pistons. Let's hope the results are the same.

Jerami Grant - 84.5% FT% in 2020-21 - You just can't compare Jerami's numbers apples-to-apples between his stint with the Pistons and the rest of his NBA career. He went from a 16% USG player to a 28% USG player, it's really an amazingly dramatic shift. What you can compare his his FT%, and that's gone up like a rocket throughout his career, landing in the mid-80's last season. The FT% increase demonstrates a massive skill upgrade that's gone on throughout his career and should keep him a valuable player no matter what his role is going forward.

Trey Lyles - 358 minutes in 2020-21 - In his age 22-24 seasons, Lyles actually put up league-average-ish true shooting numbers on moderate usage. Not bad! He had a well-above replacement level -0.6 Box Plus-Minus for those three seasons. Then last year was a dud. Was he hurt? Did he just not mesh with his teammates for some reason? I don't have any idea, but while he's not young for the NBA, he's not old either, and maybe he puts whatever last year was behind him and even improves on the age 22-24 seasons.

Rodney McGruder - His 2020-21 stats - Rodney put up career best stats as a Piston. Those stats don't mean much because they were in a very limited number of minutes, and I also don't expect Rodney to have too much impact on the court for the Pistons in any sort of optimistic scenario. BUT. Those numbers maybe demonstrate Weaver's ability to find guys that are better than you'd think looking at previous stops. Or maybe they demonstrate Coach Casey's ability to get the best out of guards. We'll call it one of those.

Josh Jackson - 11 assists to 3 turnovers this preseason - You could point to the slowly increasing FT% for hope with JJ, like I did in a postgame comment yesterday:

but I'll focus on his playmaking and lack of turnovers this preseason. Adding up the last two preseasons, he had 12 assists and 11 turnovers. Maybe some of this shooting improvement is real and will stick around? And maybe some of this improved decision making sticks around, too. If you get a bit better on both of those fronts you have a guy that's going to get a nice contract after the current one.

Killian Hayes - 7.4 AST/36 + 82.4% FT% + 6'5" - We all know the on court results for Killian have been bad. There's no getting past it. But the bottom line is he can make passes a lot of people can't make, he's very big for his position, and the FT%, both in the NBA and before that, demonstrate that there's some sort of shooting touch there.

Isaiah Stewart - Practically every single goofy All-in-One Stat you can find - I'm pretty convinced traditional number for big men are less useful than they are for other positions. Defense is what is most important for a guy like Stewart, and I think just counting up things like blocks or steals or defensive rebounds doesn't really get you much information.

There's also lots of noise in the all-in-one stats as well, but the ones I glance at all seem universal in loving Stewart's rookie season. Out of rookies that played 800 minutes last year, Stewart was 2nd in 538's RAPTOR. He was 8th in basketball-reference VORP among last year's draft picks. He rated very highly compared to other rookies at dunksandthrees.com/epm

He was also a mid-first round pick and one of the youngest player to gather so many minutes last year.

Cade Cunningham - #1 pick - That's really the only number we need to know. Cade was #1. Draft People seemed largely in agreement that he should be the #1 pick. The #1 pick is often a multi-time All Star. No need to dig any further for optimism.

Luka Garza - 27.6 PTS/36 in 2020-21/Pick #52 - We all know Garza has defensive shortcomings. There's no getting around it, but we are talking about pick #52 here. The guy can get buckets, and I'd actually like to see buckets at some point again as a Pistons' fan. The Pistons haven't had an above average offense since 2010-11. Maybe Garza finds a way to stay on the floor in certain spots and makes enough buckets on the offensive end to even out any defensive issues he creates.

Jamorko Pickett - Height/Wingspan/FT% - This almost feels like Weaver's type - guys that have size and can shoot. Pickett fits in there. The overall numbers at Georgetown are pedestrian at best. But he shot 79% from the line as a junior/senior and he's tall and has long arms. I'm sufficiently excited at getting a guy like this as an undrafted free agent even though he's older by prospect standards.

This post was inspired by the greatest in-game stats graphic in the history of the universe: 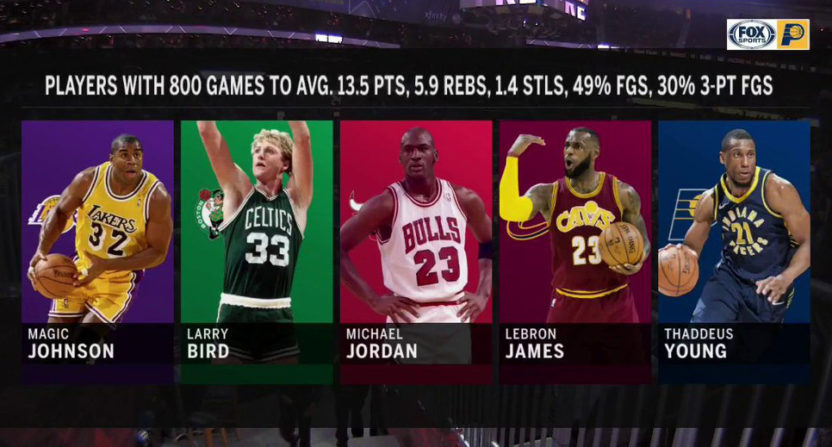