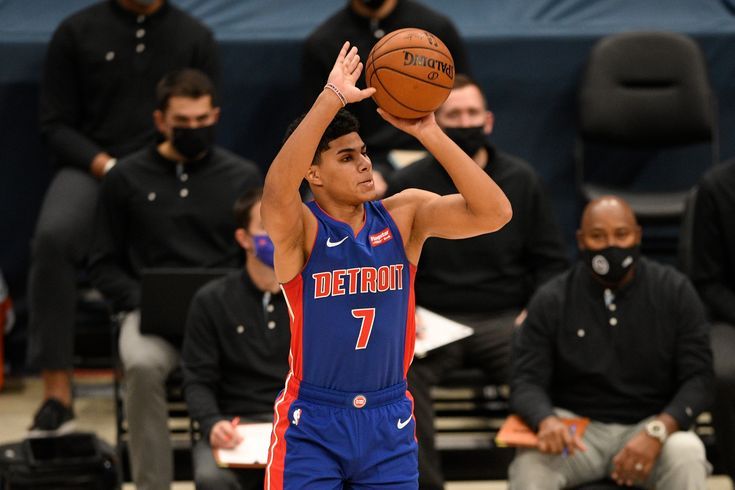 The second year guard struggled to find any consistency with his jump shot through his rookie campaign.

The potential of Killian Hayes is one of the most talked about topics amongst Piston fans. For many, he is either a bust or starting guard on a championship team, you don’t have to scroll far in the comments of a Killian piece to find people viciously arguing their case. Whilst Killian struggled during his rookie campaign, a serious injury and COVID interruptions made it impossible for him to find any consistency on court.

When breaking down Killian's game it is clear he already is a plus on the defensive end, it's when you assess his play on the other end of the floor where concern arises. There are a wide range of areas within Killian’s offensive game which require improvement, for this particular piece, I decided to dive into last season’s film and breakdown Killian’s long range jumper. I went through every game and watched each three point attempt Killian took in his rookie season, marking each attempt down as either; catch & shoot, dribble pull-up, side step three or step back three. I also investigated the percentages relating to attempts where Killian ‘kicked his legs out’.

The pace and space era of NBA basketball has put a premium on outside shooting, it’s hard to justify having one non-shooter on the floor in today’s NBA, let alone two. There are only a handful of starting guards who are a non threat from behind the arc. When looking at the projected starting line ups for the upcoming season, the only below average three point shooters starting at the guard positions are: Ben Simmons, Russel Westbrook, De’Aron Fox, Ja Morant and Dejounte Murray. Whilst these players struggle from three, they are athletically gifted dynamic offensive players from within the arc, something to this point we are yet to see from Killian. Hence, the importance of Killian developing a consistent outside jumper.

In his rookie season Killian shot a concerning 27.8% from the three point line however, it was the attempts taken off the dribble which significantly reduced his overall percentages. While you like to see the confidence in attempting step back shots, Killian should continue to perfect this shot at practice before incorporating back into his shot diet. Encouragingly, when Killian was able to get his feet set and launch a catch & shoot attempt, he connected on 32.0% of outside looks. Improvement in the catch and shoot game will be key to Killian’s development, 32.0% is an okay starting point but, if he can continue to increase this percentage, so will his impact on the game.

Whilst we saw growth in Killian’s offensive game after he returned from injury, his three point percentages stayed relatively the same. The raw numbers show an improvement in the the step back shot however, it’s hard to put a lot of stock into these percentages on such small sample sizes. The same can be said for the decrease in effectiveness on side step attempts.

The Mechanics: The Leg Kick

When assessing the mechanics of Killian’s jumper there are a couple of glaring issues. In catch and shoot situations he typically brings the ball from the right side of his body and raises up, releasing the ball from in front of his face. However, whilst improvements can be made to the mechanics above the waist, the main issues lie in Killian’s lower half of his jump shot. When loading up for a stand still shot Killian’s feet face at a 45 degree angle to the right from the basket. Killian should focus on aligning both feet to point toward the basket and while some elite shooters don’t have textbook feet positioning, with the struggles Killian had, this is certainly an area which he should work to rectify.

When returning from injury some Pistons fan’s began noticing another concerning habit with Killian’s jumper, the ‘leg kicking’. The leg kicking habit is a concern as it reduces the balance and consistency in Killian’s jump shot mechanics. Approximately 41.6% of Killian’s three point attempts included a ‘leg kick’. When reviewing the film I determined a leg kick to be when either of the two scenarios; when both feet don’t land simultaneously or his right foot lands, whilst the left leg swings across his body. Additionally, upon returning from injury, he also began to finish his jumper with his legs split.

The percentages indicate that the leg kick is not optimal and whilst Killian’s jumper as a whole is not optimal, it’s encouraging to see he improved on attempts with no ‘leg kick’ post injury.

It’s no secret that there is a lot riding on Killian’s sophomore season, with the addition of Cade Cunningham ball handling duties will be shared, therefore it’s imperative for Killian to be able to knock down open three’s. If Killian can develop a reliable jumper off the catch and continue to be a defensive nightmare for opposing demesnes, he will be a key part of the Piston restoration. In relation to Killian’s shot, he shot an impressive 82.4% from the free throw line, a good free throw percentage can often be linked to good jump shooting. Killian also closed the season with encouraging numbers, averaging 13.5ppg on 47.1% shooting from three in 4 of the last 5 games. Although he recently struggled at summer league, hopefully we can see more of the Killian Hayes that closed the 2020-2021 regular season for his second season with the Pistons.